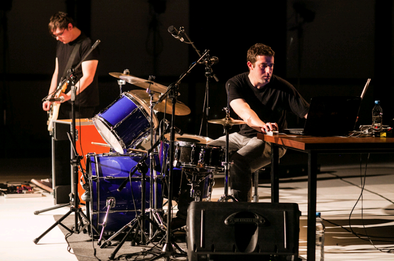 In Reculver Bay: Truth, Repetition, A Town That Fell Into The Sea (2013)

In Reculver Bay is a live performance sound work composed by Reid Dudley-Peirson and Ben Horner. The piece is built around the oral history and mythology of the village of Reculver, which was once a large coastal town before it fell into the sea in the 18th Century. Many of the myths and stories surrounding Reculver have evolved and spurred into different versions and truths over time. Because very few records remain, this oral history of Reculver has become a primary historic artifact.

The performance moves through four passages that tell the stories of the history of Reculver Bay, from the Roman and Saxon occupation of the site, through development of the bouncing bomb in WWII to the great flood of 1953. The work is blended together with field recordings and soundscapes of the area and local nature reserve.

The compositional approach to the work was inspired partly by the Alain Resnais’s film Last Year in Marienbad. The film uses repetition and stasis to explore the variation and elasticity of truth and narriative. In Reculver Bay is 40 minutes long and comprises passages of harmonic stasis and drones, alongside long, repeating (but shifting) melodies which recur across the movements.

The piece is for distorted electric guitar, drums, electronics and laptop, and was performed for Crikoteka in Krakow on 23rd November 2013 as part of the Polifonies season of events.

Further images can be seen on the Crikoteka website.